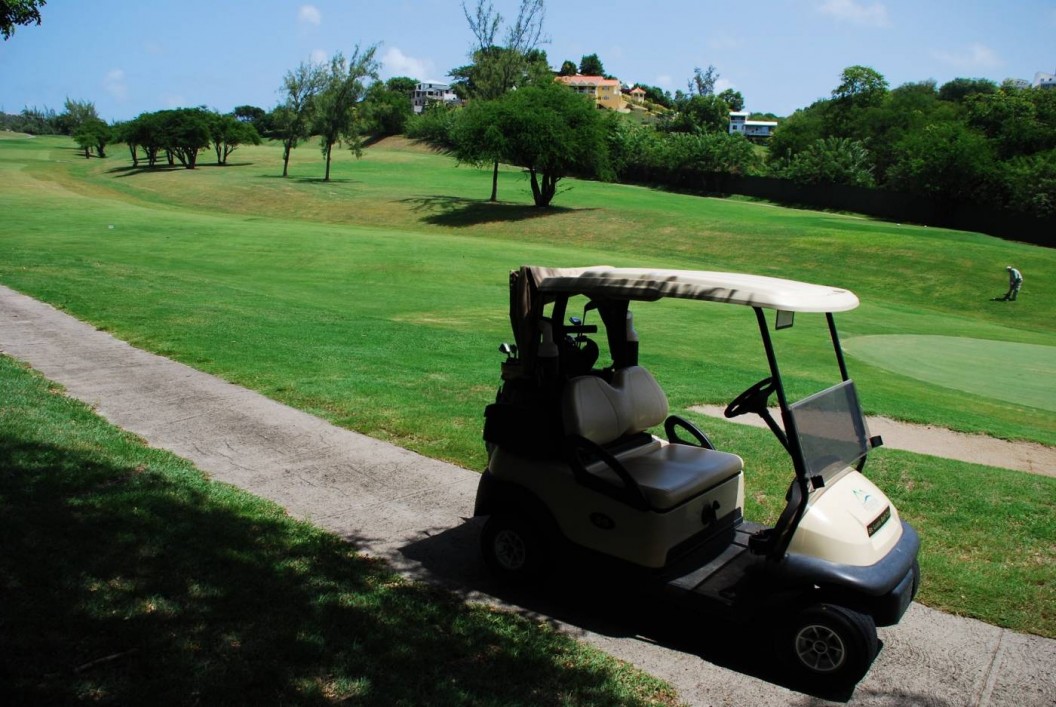 | A golf cart (called golf car in ANSI standard Z130.1, since “carts” are not self-propelled) is a small vehicle designed originally to carry two golfers and their golf clubs around a golf course or on desert trails with less effort than walking.
Golf carts come in a wide range of formats and are more generally used to convey small numbers of passengers short distances at speeds less than 15 mph (24 km/h) per ANSI Standard z130.1 as originally manufactured. They are generally around 4 feet (1.2 m) wide × 8 feet (2.4 m) long × 6 feet (1.8 m) high and weigh 900 pounds (410 kg) to 1,000 pounds (450 kg). Most are powered by 4-stroke engines.

The price of a golf cart can range anywhere from under US$1,000 to well over US$20,000 per cart, depending on several factors. These factors may include whether or not a fleet of carts is being purchased for a golf course or a country club, for example, and whether the carts are new or used. Other factors may include options such as equipment requirements, and how many people the cart is meant to transport. With the rise in popularity of golf carts, many golf clubs or country clubs offer storage and energy options to golf cart owners. This has led to the modification of golf carts to suit use at the particular golf course. Typical modification includes windshields, ball cleaners, cooler trays, upgraded motor or speed controller (to increase speed and/or torque), and lift kits.

Originally golf carts were electrically powered, but in time gasoline-powered variants started to occur. The electric variety is now used in many communities where their lack of pollutants, lack of noise, and safety for pedestrians and other carts (due to slow speeds) are beneficial. When purpose-built for general transportation these are called Neighborhood Electric Vehicles (NEVs), but with various operating limitations such as top speed and heavy regulation on which type of streets these types of carts are permitted to be used. The minimum age to drive a golf cart is 13 in Georgia, Alabama, California, Florida, Kansas, Kentucky, Rhode Island, Vermont, and South Carolina. Other states are 14–15 years of age.